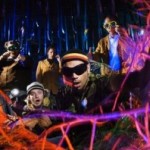 Their debut offering Dub From the Deep, with Brisbane Dub technician Drew-ID, was released in September 2007 and received regular airplay.

Dubmarine have played throughout Australia and New Zealand, and in mid 2010, they embarked on their debut tour of Europe taking to the international stage in festival slots in The Netherlands, Belgium and The Czech Republic.