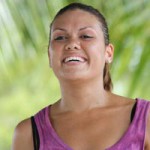 Medika has always been passionate about dancing. She performed in the production of the ‘Praying Mantis Dreaming’ with Bangarra Dance Theatre at the age of nine, where she travelled around Australia and also over to London.

She participated in the Opening & Closing ceremonies of the Sydney 2000 Olympic Games and was also part of a Hip-Hop dance group called ‘Caramell’ that won the Groove Dance-Off competition back in 2002.

A role model at Vibe 3on3® events, Medika coordinates the girls’ dancing workshops to inspire young Aboriginal kids through dance and to boost their confidence.