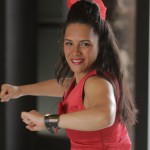 Elizabeth Timbery began dancing at the age of three. A graduate of ED5 International, Elizabeth completed her Certificate IV in Performing Arts under the training of William A Forsythe where she trained extensively in Musical Theatre, Hip Hop, Contemporary, Tap & Jazz Technique as well as singing and acting. Following the completion of ED5 she was accepted into Bozanic Entertainment Management. Elizabeth has featured as a dancer in various film clips for INXS, Amber Lawrence and The Next Step and has also featured in an international TVC choreographed by William Forsythe. She is a member of the newly formed Pacific Elements which is a Polynesian Dance Group performing throughout Sydney and NSW. Elizabeth provides choreography and visual direction for the group as well as being a performer. She teaches throughout the Eastern suburbs mainly in Hip Hop, Lyrical, Jazz and Tap.