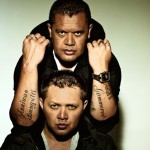 Street Warriors (brothers Abie and Warrick Wright – aka Predator and Wok) are well respected pioneers of Indigenous hip hop who have built a loyal following around Australia on the back of their energy filled live shows, poignant lyrics and their positive lifestyle messages culminating in Deadly Award winning nominations and performances.

The Street Warriors have rocked local and international crowds in excess of 10,000 and appearances have included major festivals such as Yabun, Homebake, Stylin’ Up, The Great Escape, and Groovin’ the Moo, The Dreaming and Woodford Folk Festival and a string of NAIDOC dates and support to major artists such as 50 Cent and G Unit.