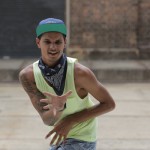 Darren is a proud descendent of Yuin, Bundjalung, Munanjali, Gamillaraay and the Murray Island nations.

Darren has been dancing since the age of 13 and has performed in over 3000 shows across Australia in remote communities and corporate functions.

He has also travelled extensively overseas – to over 23 countries representing Aboriginal and Torres Strait Island culture.

Darren also performs as a Hip Hop dancer and was a part of the opening of the 2010 ARIA Awards and has won various dance battles across NSW with his crew.